Quantum key distribution (QKD) can generate information-theoretical secure keys between distant communication parties (Alice and Bob) [ 1– 3]. Assume the sifted keys are \(K_\mathrm {s}^A\) and \(K_\mathrm {s}^B\) with length of n in both sides (Alice and Bob) after the quantum physical communication phase, \(K_\mathrm {s}^A\ne K_\mathrm {s}^B\) with the quantum bit error rate \(E_\mu \), which is introduced by imperfect implementations of QKD systems and potential attacks. Information reconciliation (IR), a critical procedure of the post-processing phase in QKD systems, aims at reconciling \(K_\mathrm {s}^A\) and \(K_\mathrm {s}^B\) to an equally weak secure key \(K_\mathrm {IR}\), by exchanging the minimized extra syndrome information [ 1, 4, 5]. IR ensures the correctness of QKD systems and is the precondition to generate the final secure keys.
Initially, IR procedure is implemented by performing interactive methods known as BBBSS [ 5, 6] and Cascade [ 7]. Though high efficiency is achieved by several improvements of Cascade algorithms, multiple rounds of communication are still required, resulting in significant heavy latency and authentication cost of QKD systems. Nowadays, IR is performed with forward error correction (FEC) codes, such as low-density parity-check codes [ 8, 9] and polar codes [ 10– 12], where only one message containing a syndrome is exchanged between Alice and Bob, called as one-way IR scheme. Recently, most IR research focuses on performing with polar codes, for the advantage of the low computational complexity \(O(n\log n)\) and high efficiency with potential to reach the Shannon limit, when the block size of a sifted key becomes as large as possible [ 13– 15]. Though several improvements of polar decoders achieve higher IR efficiency with certain input scale ( \(\sim 10^6\) bits), the \(\varepsilon \)-correctness of QKD systems is increased to the level of \(10^{-3}\) [ 10– 12, 16]. The state-of-the-art efficiency of polar codes-based IR scheme reaches 1.176 with the input block size of 1 Mb when \(E_\mu = 0.02\), while \(\varepsilon \) still stays to 0.001 [ 11]. Actually, \(\varepsilon \) should be decreased as low as possible (usually \(<10^{-6}\)), when performing polar codes into the IR procedure of QKD systems.
Anzeige
Therefore, in this article, we propose a Shannon-limit approached (SLA) IR scheme performing improved polar codes, which mainly composes of a forward reconciliation phase and an acknowledgment reconciliation phase. In the forward reconciliation procedure, a novel block checked successive cancellation list (BC-SCL) decoder was proposed to reduce the \(\varepsilon \)-correctness and error sub-blocks by remaining the successfully decoded sub-blocks with cyclic redundancy check (CRC) values in advance. Meanwhile, existed errors in sub-blocks after the forward reconciliation procedure can be found by calculating the CRC values. For failure corrected sub-blocks, an additional acknowledgment reconciliation procedure is performed to decrease the \(\varepsilon \) to the desired level. Finally, the corrected key \(K_\mathrm {IR}\) is achieved. With the advantage of CRC strategy, the BC-SCL decoder determines the corrected decoding path from multiple decoding paths to reduce the \(\varepsilon \)-correctness and choose the unsuccessfully decoded sub-blocks which are corrected by the acknowledgment reconciliation phase. The experimental results show that our SLA IR scheme achieves correctness \(\varepsilon \) to \(10^{-8}\) and the reconciliation efficiency is better than 1.091, while the input block size is 128 Mb. In principle, the efficiency and the SLA IR scheme can close to the Shannon limit as the block length increases as large as possible. We achieved an efficiency of 1.055 with the \(E_\mu =0.02\), when the input scale of SLA IR is increased to 1 Gb. Meanwhile, our SLA IR scheme with large-scale block size will benefit a lot in performing the rigorous statistical fluctuation analysis to remove the finite-size key effects [ 17, 18] on the final secure key. Thus, SLA IR scheme can be efficiently implemented in practical QKD systems.

Given any binary-input discrete memoryless channel (B-DMC), E. Arikan first proposed a Shannon-limit approached information reconciliation scheme with complexity \(O\left( N\log N\right) \), named as polar codes in 2009 [ 13, 14]. In 2014, P. Jouguet and S. Kunz-Jacques performed the polar codes in the IR procedure in QKD systems; furthermore, they showed that polar codes have an equivalent efficiency below 1.12 for given upper bound \(\varepsilon =0.1\) and block length starting from 64 Kb to 16 Mb [ 10]. Afterward, A. Nakassis and A. Mink described flexible polar codes-based IR approaches for QKD systems and showed the potential to approach the Shannon limit with a more efficient decoder when the location and values of the frozen bits were known at the design time [ 12]. Yan et al. [ 11] improved the polar codes-based IR scheme with successive cancellation list (SCL) decoding and optimized coding structures, which decreased the \(\varepsilon \)-correctness to the level of \(10^{-3}\) and the equivalent efficiency reached to 1.176. The detailed performance of the above IR schemes and partial experimental results of our SLA IR scheme are described in Table  1.
Table 1
The performance of polar codes-based IR schemes

In principle, lower \(\varepsilon \)-correctness and Shannon-limit f of polar codes-based IR schemes can be approached with increased input block size and improved decoders [ 22– 29]. Moreover, IR schemes with large-scale input block size benefit much in performing the rigorous statistical fluctuation analysis to remove the finite-size key effects on the final secure keys. However, \(\varepsilon \)-correctness of state-of-the-art polar codes-based IR schemes still stays on the level of \(10^{-3}\), which reduces the final secure key rates of QKD systems.
×
Anzeige
In this article, we propose an improved Shannon-limit approached (SLA) IR scheme for QKD, and the schematic diagram is shown in Fig.  1. The proposed SLA IR scheme mainly contains two phases: the forward reconciliation phase and the acknowledgment reconciliation phase. In the forward reconciliation phase, Alice constructs the encoding vector U with true random numbers and the optimal frozen vector V, chosen from the frozen vector library with the quantum bit error rate \(E_\mu \). Then, Alice calculates the syndrome Z of \(K_\mathrm {s}^A\) with the polar codes encoder and, meanwhile, divides the vector U to m sub-blocks and calculates the cyclic redundancy check (CRC) value of each block. Afterward, the syndrome Z and combined CRC value vector T are transmitted to Bob via classical channel. Bob performs the same operations to select the frozen vector V and then performs the improved BC-SCL decoder (detail described in Sect.  3.3) to get the corrected vector \(U^\prime \) and the status vector \(\sigma \), indicating which sub-block is failure corrected. In the acknowledgment reconciliation phase, Alice and Bob perform a low-density parity-check (LDPC) error correction procedure to correct the error bits in the failure corrected sub-blocks. Afterward, Alice and Bob obtain the uniform key \(K_\mathrm {IR}\), respectively.

3.4 Performance of the SLA IR scheme

We have implemented the Shannon-limit approached (SLA) IR scheme with the BC-SCL decoder. Afterward, a series of experiments have been conducted to evaluate the efficiency of the SLA IR scheme with the limitation of \(\varepsilon _\mathrm {f} \le 0.01\). In the experiments, the upgrading and degrading channel construction of polar codes [ 31, 32] is used to determine the frozen vector of polar codes. The number of sub-blocks m and length of CRC d are both set as 32 and the list size of BC-SCL decoder l is set as 16, so that \(\varepsilon \)-correctness of SLA scheme is calculated as the level of \(10^{-8}\) with \(\varepsilon _\mathrm {II}=10^{-6}\). Meanwhile, the correction threshold of LDPC codes [ 8] is directly used to evaluate the efficiency of the acknowledgment reconciliation. We collected the sifted key from the QKD network [ 33], and extended the collected data with the targeted length and QBER as the sifted key used in experiment.
The sifted key used in the experiment is collected from the QKD network experiment [ 33], and extended to the targeted length and QBER.
The SLA IR scheme is tested for 10,000 times each round with QBER ranging from 0.01 to 0.12 with interval of 0.01, block length of 1 Mb, 16 Mb, 128 Mb. The experimental results of the \(\varepsilon _\mathrm {f}\), the reconciliation efficiency f and average yield \(\gamma \) are shown in Table  2. In particular, the leaked information used for calculating the efficiency is accumulated from all tests instead of one test for the different error sub-blocks in the forward reconciliation. Meanwhile, we have tested the SLA IR scheme for three practical cases [ 33– 35] and the performance is shown in Appendix section.
Table 2
The experimental result of the SLA IR scheme
The efficiency f of the SLA IR scheme is 1.205, 1.114, 1.091 when the block length is 1 Mb, 16 Mb, 128 Mb, respectively. When the block length increases to 128 Mb, the f and \(\gamma \) of our SLA IR scheme are much more efficient than the previous polar codes-based IR schemes shown in Table  1. Meanwhile, the efficiency increases and the \(\varepsilon _\mathrm {f}\) decreases as block length is increased to 1 Mb, 16 Mb and 128 Mb. Moreover, the SLA IR scheme runs around 167 h on a personal computer with the block length \(n=\) 1 Gb, \(E_\mu =0.02\), resulting the efficiency of 1.055 and \(\varepsilon _\mathrm {f}\) less than \(10^{-2}\). As shown in Table  2, performance of polar codes-based IR schemes can be improved by increasing the block lengths; however, the implementation of large-scale decoders will result in huge computational complexity, which may destroy the system availability. Therefore, with limited block lengths, our SLA IR scheme can be performed to further improve both the reconciliation efficiency and the correctness of QKD systems.

This work was supported in part by the National Natural Science Foundation of China under Grant No. 61972410 and the research plan of National University of Defense Technology under Grant No. ZK19-13.

The authors declare no competing interests.
Open AccessThis article is licensed under a Creative Commons Attribution 4.0 International License, which permits use, sharing, adaptation, distribution and reproduction in any medium or format, as long as you give appropriate credit to the original author(s) and the source, provide a link to the Creative Commons licence, and indicate if changes were made. The images or other third party material in this article are included in the article’s Creative Commons licence, unless indicated otherwise in a credit line to the material. If material is not included in the article’s Creative Commons licence and your intended use is not permitted by statutory regulation or exceeds the permitted use, you will need to obtain permission directly from the copyright holder. To view a copy of this licence, visit http://​creativecommons.​org/​licenses/​by/​4.​0/​. 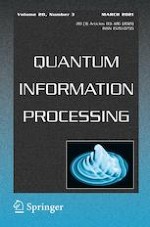