The internet has seen many steps of evolution since the inception of the world wide web in 1992. They comprise various steps in electronic, mobile and social business (Wikipedia 2015). While all phases have spurred new business models, the recent social web also enables a paradigm change from owning to using goods and/or services. Contrary to the traditional market model, which is based on ownership, the “Sharing Economy” is built on using and sharing of products and services among others. The principle per se is not new: sharing resources is known in business-to-business (B2B) domains, such as the sharing of machinery in agriculture and forestry (e.g., Maschinenring in the German-speaking countries) as well as in business-to-consumer (B2C) domains (e.g., self-service laundries, ski/video and car rental, public libraries and pools). It has recently received a proliferation to consumer-to-consumer (C2C) transactions and resulted in new business models. Three drivers may be identified for this development (Botsman 2014, p. 24; Hamari et al. 2015, pp. 5 ff.): …
Anzeige
Vorheriger Artikel Interview with Michael Rosemann on “The Role of Business Process Management in Modern Organizations”
Nächster Artikel Erratum to: Mixed-Paradigm Process Modeling with Intertwined State Spaces 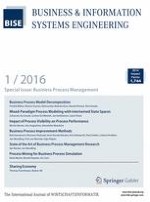 The Impact of Process Visibility on Process Performance

State of the Art

The Use of Process Mining in Business Process Simulation Model Construction

A Critical Evaluation and Framework of Business Process Improvement Methods