As the oldest, but least understood sensory system in evolution, the olfactory system represents one of the most challenging research targets in sensory neurobiology. Although a large number of computational models of the olfactory system have been proposed, they do not account for the diversity in physiology, connectivity of local neurons, and several recent discoveries in the insect antennal lobe, a major olfactory organ in insects. Recent studies revealed that the response of some projection neurons were reduced by application of a GABA antagonist, and that insects are sensitive to odor pulse frequency. To account for these observations, we propose a spiking neural circuit model of the insect antennal lobe. Based on recent anatomical and physiological studies, we included three sub-types of local neurons as well as synaptic short-term depression (STD) in the model and showed that the interaction between STD and local neurons resulted in frequency-sensitive responses. We further discovered that the unexpected response of the projection neurons to the GABA antagonist is the result of complex interactions between STD and presynaptic inhibition, which is required for enhancing sensitivity to odor stimuli. Finally, we found that odor discrimination is improved if the innervation of the local neurons in the glomeruli follows a specific pattern. Our findings suggest that STD, presynaptic inhibition and diverse physiology and connectivity of local neurons are not independent properties, but they interact to play key roles in the function of antennal lobes. 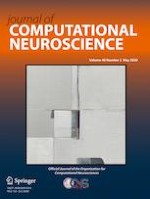 Modelling acute and lasting effects of tDCS on epileptic activity

Dynamics of a neuron–glia system: the occurrence of seizures and the influence of electroconvulsive stimuli

A computational model for grid maps in neural populations

Inference of synaptic connectivity and external variability in neural microcircuits