The majority of particulate matter (PM) emitted from diesel engines is captured by advanced emission aftertreatment, here defined as the combination of a diesel particulate filter (DPF) and selective catalytic reduction (SCR). Some PM is still emitted, however, and because PM from uncontrolled diesel engines is known to be carcinogenic, any changes in diesel PM chemistry with aftertreatment would be of interest. Here, we present PM chemical composition from emissions of a 2010 compliant heavy-duty diesel vehicle (HDDV) with original equipment manufacturer aftertreatment collected on bulk filters and impactor stages. Results reported include inorganic ions, water-soluble organic carbon (WSOC), thermo-optical organic and elemental carbon (OC/EC), and specific polycyclic aromatic hydrocarbons (PAHs). We compare the model year 2010 composition to that emitted by a model year 1998 HDDV without DPF/SCR. We found that diesel PM mass emissions are reduced by one to two orders of magnitude by aftertreatment, but that a carbon-based accumulation mode (∼100 nm), the defining feature of traditional diesel PM, is still present in 2010 compliant HDDVs. Under heavier engine load conditions (high-speed cruise), the 2010 vehicle also emitted a sulfate-rich nucleation mode that, at times, made up the majority of particulate mass. OC and EC size distributions are similar for the two HDDVs, although during cruise, a second OC peak was found in the 2010 nucleation mode. PAH and WSOC data suggest that the OC emitted with aftertreatment is more oxidized and has a smaller relative contribution of unmodified fuel and lube hydrocarbons. 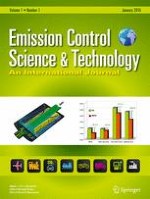 An Asymptotic Solution for Washcoat Pore Diffusion in Catalytic Monoliths