Deep saline aquifers still remain a significant option for the disposal of large amounts of CO2 from the atmosphere as a means of mitigating global climate change. The small scale Carbon Capture and Sequestration demonstration project in Ordos Basin, China, operated by the Shenhua Group, is the only one of its kind in Asia, to put the multilayer injection technology into practice. This paper aims at studying the influence of temperature, injection rate and horizontal boundary effects on CO2 plume transport in saline formation layers at different depths and thicknesses, focusing on the variations in CO2 gas saturation and mass fraction of dissolved CO2 in the formation of brine in the plume’s radial three-dimensional field around the injection point, and interlayer communication between the aquifer and its confining beds of relatively lower permeability. The study uses the ECO2N module of TOUGH2 to simulate flow and pressure configurations in response to small-scale CO2 injection into multilayer saline aquifers. The modelling domain involves a complex multilayer reservoir–caprock system, comprising of a sequence of sandstone aquifers and sealing units of mudstone and siltstone layers extending from the Permian Shanxi to the Upper Triassic Liujiagou formation systems in the Ordos Basin. Simulation results indicate that CO2 injected for storage into deep saline aquifers cause a significant pressure perturbation in the geological system that may require a long duration in the post-injection period to establish new pressure equilibrium. The multilayer simultaneous injection scheme exhibits mutual interference with the intervening sealing layers, especially when the injection layers are very close to each other and the corresponding sealing layers are thin. The study further reveals that injection rate and temperature are the most significant factors for determining the lateral and vertical extent that the CO2 plume reaches and which phase and amount will exist at a particular time during and after the injection. In general, a large number of factors may influence the CO2–water fluid flow system considering the complexity in the real geologic sequence and structural configurations. Therefore, optimization of a CO2 injection scheme still requires pursuance of further studies. 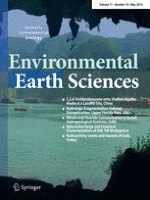 Adsorption studies of 1,2,4-Trichlorobenzene onto shallow aquifer media at the Luhuagang landfill site in Kaifeng, China