Spalling (Slabbing) is a typical failure phenomenon, which often occurs after excavation of rectangular tunnel. It has a serious impact on the construction, support and stability of the tunnel. To investigate the characteristics and mechanism of spalling-failure in rectangular tunnel, a series of tests were carried out on granite rectangular tunnel with different height-to-width ratios (H/Ws) (1/2, 3/4, 1/1, 4/3 and 2/1) by using true triaxial system. The whole process of spalling was monitored and recorded by wireless micro camera. According to the test results, the failure mode and failure characteristics of the sidewall spalling were summarized, and the influence of the H/Ws of the rectangular hole on the failure characteristics and stability of the tunnel were discussed in detail. The test results indicate that when the vertical principal stress is the maximum principal stress, the sidewalls of the specimens experience spalling failure. When the spalling occurs, the crack occurs at the shoulder corner of the sidewall and propagates along the axis, resulting in the spalling damage gradually developing from the local area to the whole sidewall along the axis, and forming the thin rock slab parallel to the sidewall. In addition, rectangular tunnels with different H/Ws clearly influence spalling failure. When the height was the same, the degree of spalling damage decreases with the decrease of its width. On the contrary, when the width was the same, the degree of spalling damage does not decrease with the increase in the height. When the height was equal to the width, the damage degree of the tunnel spalling is the largest, which seriously affects the safety of the tunnel. In the case of the same cross-section area of the tunnel, the stability of the tunnel can be improved by selecting the layout mode with the height greater than the width. It is necessary to strengthen the monitoring of the cracks at the shoulder corner of the tunnel, which can reduce the safety risk of the tunnel. These conclusions are helpful to the design of the tunnel, the prevention of spalling and the improvement of the stability of the tunnel. 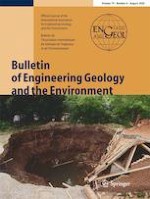 Evaluation of dynamic stability and analysis of reinforcement measures of a landslide under seismic action: a case study on the Yanyangcun landslide