Based on previous studies of rock behavior versus rock sample size and various research on rockburst simulation tests, a modified true-triaxial unloading testing machine was utilized to perform rockburst tests on granite specimens with changing heights for size effect investigation. The parameter of the height-to-thickness ratio (H/T) is proposed to characterize the rock scale, and it varies from 5 to 2 with a fixed thickness of 30 mm and changing heights from 150 to 60 mm. In this study, several testing methods were adopted to study the influence of H/T including non-destructive acoustic emission (AE) technology and high-speed camera recording systems as well as fragment kinetic energy analysis. The experimental results indicated that a size effect does exist during the rockburst simulation process and affects the rock failure strength and fracture mode. It can be seen that rock failure strength has an increasing trend with the decreasing of H/T. And at the higher H/T, extensile and splitting failures are dominant, and then the mixed failure mode including tensile and shear appears with decreasing H/T, until the single-plane shear becomes the main failure mode at the lowest H/T. AE energy release and kinetic energy of ejected fragments are not quite sensitive to sample size for H/T lower than 3. When the ratio of height and width is not lower than 3, the total AE energy during rock failure and kinetic energy of ejected fragments increased with the decreasing of sample size. With a further decrease of the ratio to 2, the total AE energy and kinetic energy of ejected fragments began to decrease. 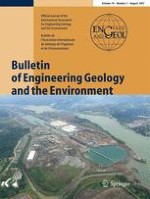 Monitoring and engineering geology analysis of the Zhangmu landslide in Tibet, China

Uncertainties in estimating the roughness coefficient of rock fracture surfaces