Slip at the interface between immiscible polymer melts remains poorly understood. A method that relies solely on rheological measurements to obtain the interfacial slip velocity uses the slip-induced deviation in the flow variables. To use the method, accurate estimates of the flow variables under the assumption of no-slip are necessary. Although such estimates can be easily derived under some cases, in general, this is not straightforward. Therefore, methods to determine the interfacial slip velocity without using estimates for the flow variables under no-slip conditions are desirable. In this work, we focus on investigations of slip at the interface between two immiscible polymer melts undergoing two-phase coaxial flow. To enable such investigations, we have adapted the Mooney method, usually used to investigate wall slip, to investigate polymer/polymer interfacial slip. Using this method, we have measured the slip velocity at the interface between polypropylene and polystyrene as a function of the interfacial stress. To determine the validity of the modified Mooney method, we also determine the slip velocity using the slip-induced deviation in the flow variables. To enable this determination, we use polypropylene and polystyrene with almost identical shear rate-dependent viscosities over a range of shear rates. The slip velocity obtained from the modified Mooney method displayed excellent agreement with that determined using the deviation from no-slip. In agreement with prior work, the dependence of the slip velocity on the interfacial stress is a power-law. Our investigation spans a sufficiently wide range of interfacial stress to enable the direct observation of two power-law regimes and also the transition between the two regimes. We also find that the power-law exponent of approximately 3 at low stresses decreases to approximately 2 at high stresses. 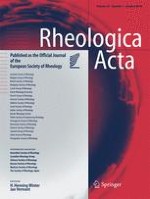 The structure and properties of long-chain branching poly(trimethylene terephthalate)