Slopes with interbedded rock layers are widely distributed around the world and have experienced numerous landslide disasters. This study used physical model tests and the distinct-element method to identify the failure mechanisms of slopes with interbedded sandstone and mudstone. First, physical model tests were designed and carried out to investigate the effects of river incision and mudstone wetting-softening on the deformation and failure modes of such slopes. Subsequently, a distinct-element simulation was conducted to back-analyze the physical model tests and to investigate the effects of the boundary conditions and joint sets on the slope failure mechanisms. The physical model tests reveal that river incision alone may not be sufficient to cause a landslide. However, this situation may change instantaneously depending on the exposure and wetting-softening of deep mudstone layers. The results of the physical model tests were then used to verify the results of the distinct-element simulation. The simulated displacement distribution and failure mode agreed well with the measurements and observations from the physical model tests. The numerical simulation indicated that numerous tensile micro-cracks form in the upper part of the slope due to river incision, and several micro-cracks may develop into macro-cracks as a result of mudstone wetting-softening. In addition, a preliminary numerical parametric study indicates that the slope failure mode does not change when the left boundary condition varies from free to roller conditions, and the layers are continuous instead of discontinuous. However, the simulation shows that penetrative tension cracks are less likely to form in the river incision process of a slope without joints. In this case, landslides do not tend to occur because it is difficult for rainfall to seep into the slope and converge to mudstone layers, which are prone to softening in water. 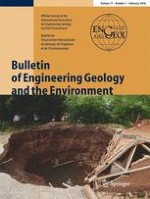 The influence of an abandoned goaf on surface subsidence in an adjacent working coal face: a prediction method

A new approach for estimation of the rock mass deformation modulus: a rock engineering systems-based model