Relatively little is understood about the contrast between different genres of video game playing and specific player bases, and yet this knowledge is vital for games studios that want to design effective practical applications. This paper reports on a study of regular online gamers (N = 84, mean age 29 years) who played either a first person shooter (FPS) solely, or played a massively multiplayer online role playing game (MMORPG) either solely or in addition to FPS games, for at least 1 h per week. Levels of social anxiety on- and off-line were measured using the Mini-Social Phobia Inventory to assess whether gaming in general serves a self-regulatory function for social anxiety. Relationships between levels of awareness (measured using the Mindful Attention Awareness Scale) and social anxiety were also investigated. Findings revealed that participants who did not play MMORPGs exhibited significantly different levels of social anxiety online and offline, whereas this difference was not apparent amongst players who regularly played an MMORPG. The findings suggest that gaming has varied uses for a range of people and the beneficial aspects of online gaming should be explored further with a view to their usefulness in a clinical context. 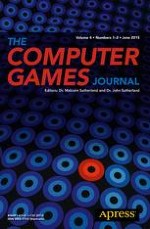 Toward a Unified Theory of Digital Games

Everybody’s Talking About Pop Music: The Evolution of the Cinematic Video Game