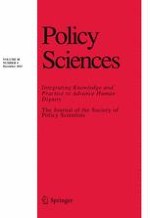 The political use of knowledge in the policy process

Tracing the sources of legitimacy: the impact of deliberation in participatory natural resource management