This paper proposes a study of the various ways in which social and ethical issues are integrated in the curricula of nanoscience and nanotechnology master degrees. During the last decade, new types of courses have appeared in science and technology universities, first in the United States and now reaching Europe and France, associating a call for interdisciplinarity with a strong convergence of science and industry and new ways of integrating social and/or human sciences in scientific curricula. These courses entitled “science and society”, meant for science students, lean on (and participate in the construction of) specific ways of describing science, technology, and the social world, generally saturated with political values. The integration of these courses in science education, linked with a strong effort to specify new institutional organizations of scientific practice and education (in particular through political support of emerging fields like nanoscience, synthetic biology, or the cognitive sciences), may play an important role in the acculturation of future scientists and engineers to “good” scientific practices and discourses. The case of nanoscience and nanotechnology is particularly revealing of the changes which are now taking place in some universities. This paper will strive to identify different types of courses called “nano and society”, taking examples from both French and American contexts, and linking them to more or less implicit socio-epistemic and political values. 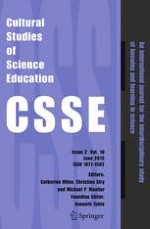 A crisis of meaning: promoting new directions in science education

College admissions viewbooks and the grammar of gender, race, and STEM

Signs of taste for science: a methodology for studying the constitution of interest in the science classroom