Previous research documents the negative effect of guilt on allocation behaviors in three-party dictator games. In these studies, guilty dictators gave more resources to their victims but fewer to third parties. We test whether this allocation behavior reflects greater social pressure from the victim in comparison to a third party (Experiment 1), and whether this pressure is reduced if a guilty dictator must take away resources as opposed to giving resources to the two players (Experiment 2). In two experiments, participants distributed 200 tokens in a three-party dictator game after an experimental manipulation of guilt in which participants learned they caused or did not cause their partner to lose a potential reward. In Experiment 1, dictators randomly assigned to the guilty condition reported more social pressure from the victims. Social pressure differences mediated the relationship between the experimental manipulation of guilt and the distribution of tokens between the dictator’s previous partner and another player. In Experiment 2, guilty dictators randomly assigned to take resources from the other two players reported more social pressure from the new player, and distributed the tokens more fairly between their previous partner and the new player in comparison to guilty dictators required to give resources to the other two players. Participants’ allocation behavior reflects social pressure from victims (created by feelings of guilt) and third parties (which depends upon whether game outcomes for other players are framed as rewards or costs). 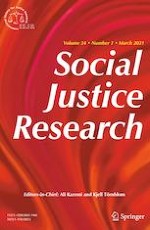 What Makes Diets Political? Moral Foundations and the Left-Wing-Vegan Connection

Implications of Longevity Bias for Explaining, Evaluating, and Responding to Social Inequality