For a long time, researchers investigate the impact of diversity on society. To measure diversity, either archival data at the national level of census data at the neighborhood level, within a single country are used. Both approaches are limited. The first approach does not allow to investigate variation in diversity within countries and the second approach misses the possibility to investigate cross national differences. The present study aims at bringing these two approaches closer together by constructing diversity measures based on the European Social Survey (ESS). The ESS is collected every 2 years since 2002 and includes individual level data that allow replicating earlier measures of ethnic, linguistic, and religious diversity for 30 European countries. Furthermore, since respondents are asked to indicate in what region they live, measured with the Nomenclature of Territorial Units for Statistics classification, it is possible to construct disaggregated measures. Comparing the new indicators with existing diversity scores leads to the following conclusions. First, the new and old measures are strongly correlated at the national level. Secondly, investigating the relationship between diversity and different kinds of sociality (interpersonal trust, institutional trust, and support for government redistribution) shows that regional diversity is more strongly related to them than diversity at the national level. 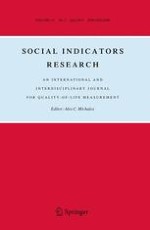 Leisure Time in Modern Societies: A New Source of Boredom and Stress?

Loneliness and Life Satisfaction in Turkish Early Adolescents: The Mediating Role of Self Esteem and Social Support

Social and Economic Wellbeing in Europe and the Mediterranean Basin: Building an Enlarged Human Development Indicator