As a US east coast state with a major income from outdoor recreation and tourism, Delaware highly values its environmental quality and natural resources. However, no results on polycyclic aromatic hydrocarbons (PAHs) contamination in soil at natural recreational areas (NRAs) in the state have been reported. In this study soil samples from seven state parks, two city parks, two state forests, and two national wildlife refuges in Delaware were analyzed for the concentrations of 12 selected PAHs. Results indicated that the median concentration of total PAHs in urban, suburban, and rural NRAs was 1,159, 138, and 130 μg/kg, respectively. Based on the classification proposed by Maliszewska-Kordybach, soil PAH contamination level at almost all sampling sites in urban NRAs was classified as contaminated or heavily contaminated, while that at sampling sites in suburban and rural NRAs was classified as not or weakly contaminated. Principal component analysis showed that all these areas share the same independent variable, which may be composed of one or more contribution sources. Pyrogenic processes were inferred to be the major source of soil PAH contamination in Delaware NRAs. Individual PAH concentration at all sampling sites were observed below the limit of Canadian Quality Guidelines except for site F3, where the concentration of benzo[b]flouranthene, benzo[k]flouranthene, and benzo[a]pyrene was found to exceed the limit by 88.3, 125, and 281 %, respectively. Further investigation on PAH contamination and possible remediation in area F are recommended. 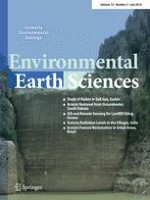 Chemical characteristics of coastal rainwater from Puducherry to Neithavasal, Southeastern coast of India

Distributions of total, inorganic and organic phosphorus in surface and recent sediments of the sub-tropical and semi-pristine Guaratuba Bay estuary, SE Brazil