This paper deals with soil/reinforced geotextile interface behaviour in direct shear and pullout movements. A soil/geosynthetic direct shear apparatus, developed in accordance to EN ISO 12957-1 (2004) and ASTM D5321-92 (1992) standards, is presented. Some details of the test (like: specimen fixation, influence of the vertical stress on the registered horizontal force, type of test and measurement of the vertical displacement) are discussed and modifications in the test procedures are adopted. Then, the reinforced geotextile and the residual soil of granite used in the research are described. The behaviour of soil/geosynthetic interface in direct shear is characterized based on modified direct shear tests and maximum interface shear stress is determined at peak and residual for a confining stress of 50 kPa. The modification in the pullout test apparatus described by Lopes and Ladeira (1996a; 1996b) and by Lopes and Lopes (1999) are noticed. The behaviour of soil/geosynthetic interface in pullout is characterized based on pullout tests performed, in accordance EN 13738 (2004), and interface shear stress at maximum pullout force is defined for a confining stress of 50 kPa. Finally, the values of interface coefficient at soil/geosynthetic interface are obtained in direct shear and in pullout and then compared. The main conclusions that can be outlined from the present study are the following: modifications should be made to EN ISO 12957-1 (2004) standard, namely in what concerns the dependence of the measured horizontal force from the vertical stress, the difficulties to perform constant area direct shear test with the lower half box filled with soil and on the measurement of the vertical displacement of the load plate; on the contrary to which is normally accepted the characteristics of the behaviour of soil/geosynthetic interface in pullout, when the geosynthetic has a full plane contact area with the soil, are not able to be obtained based on results of direct shear tests, as in this type of tests the contribution of the geosynthetic deformation on the characteristics of the interface in pullout is not considered. 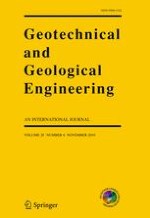 Effect of Water Quality on the Dispersive Characteristics of Soils Found in the Morwell Area, Victoria, Australia