Ports and marine transportation play important roles in the development of Vietnam, but there are increasing concerns over environmental issues related to these activities. Garbage generated from ships, including normal and hazardous waste, is a significant source of coastal pollution due to illegal disposal into the sea and improper handling on shore. This study focuses on ship-garbage management systems at Haiphong ports, the largest port area of northern Vietnam. A garbage composition survey and a survey of chief officers’ attitudes towards port reception facilities were conducted to provide baseline data for controlling and managing garbage. As a result, with the two main types of ships at Haiphong ports, bulk ships and container ships, we found notable differences in garbage composition and chief officers’ attitudes. A higher percentage of recyclable materials was discharged at ports by container ships than bulk ships. While garbage separation and collection fees were the greatest factors affecting garbage delivery attitudes, chief officers on container ships had better attitudes towards garbage separation than on bulk ships. In particular, they had a positive view about ship-garbage separation. The study contributes to establishing a comprehensive waste management plan at ports, which is expected to facilitate strategies towards sustainable port. 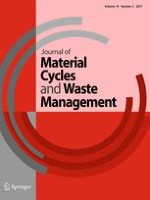 The effects of external costs on the system selection for treatment and disposal of municipal solid wastes: a deterministic case study for a pre-assessment