This paper presents enhanced adaptive differential evolution (EADE) algorithm for solving high-dimensional optimization problems over continuous space. To utilize the information of good and bad vectors in the DE population, the proposed algorithm introduces a new mutation rule. It uses two random chosen vectors of the top and bottom 100p% individuals in the current population of size NP, while the third vector is selected randomly from the middle [NP-2(100p%)] individuals. The mutation rule is combined with the basic mutation strategy DE/rand/1/bin, where the only one of the two mutation rules is applied with the probability of 0.5. This new mutation scheme helps to maintain effectively the balance between the global exploration and local exploitation abilities for searching process of the DE. Furthermore, we propose a novel self-adaptive scheme for gradual change of the values of the crossover rate that can excellently benefit from the past experience of the individuals in the search space during evolution process which, in turn, can considerably balance the common trade-off between the population diversity and convergence speed. The proposed algorithm has been evaluated on the 7 and 20 standard high-dimensional benchmark numerical optimization problems for both the IEEE CEC-2008 and the IEEE CEC-2010 Special Session and Competition on Large-Scale Global Optimization. The comparison results between EADE and its version and the other state-of-art algorithms that were all tested on these test suites indicate that the proposed algorithm and its version are highly competitive algorithms for solving large-scale global optimization problems. 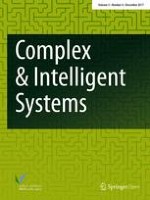 Survey and State of the Art

A mini-review on preference modeling and articulation in multi-objective optimization: current status and challenges