» Jetzt Zugang zum Volltext erhalten
Wichtige Hinweise
Translated by A.N. Osiptsov
Abstract—A mathematical model of a two-phase turbulent jet flow is presented, the averaged equations of which are written for each phase in Euler variables. Analysis of the results of calculations performed using this mathematical model made it possible to identify the origins of a nonmonotonic variation in the volume concentration of the dispersed phase along the axis of the two-phase jet. The influence of particle size, transverse velocity, particle concentration, and phase velocity slip in the initial section of the jet on the variation of the particle concentration in the jet is considered. It is shown that the listed factors cause a nonmonotonic variation in the particle volume concentration in a two-phase jet only when the value of the Stokes number based on the phase parameters in the initial section of the jet is greater than 0.14–0.15. At lower values of the Stokes number, when the particles can be regarded as a passive admixture, their volume fraction in the jet decreases monotonically along the jet axis, same as the impurity concentration in a gas jet of variable composition. 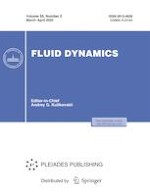 Comparison of Air-Breathing Engines with Slow and Detonation Combustion