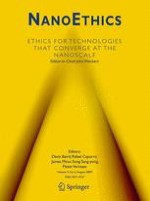 Let’s Get Small: An Introduction to Transitional Issues in Nanotech and Intellectual Property

Green Dreams of Reason. Green Nanotechnology Between Visions of Excess and Control

Two Dimensions of the Ethical Problems Related to Nanotechnology

Why Do We Need to Know What the Public Thinks about Nanotechnology?