The sequence of eruption, spatial pattern, and spatio-temporal relationships among the Neogene-Quaternary rhyolitic and basaltic lava along the Snake River Plain (SRP) in Idaho are analyzed applying the spatial methods of global and local Moran’s I, standard deviational ellipse, and Ripley’s K-function. The results of the analyses by the Moran’s I and K-function methods indicate a higher spatial autocorrelation, hence clustering, of rhyolitic lava compared to the more dispersed basaltic lava in each center of eruption along the SRP. The clustered nature of rhyolitic lava around each caldera either reflects the original spread and large thickness of the rhyolitic lava, or the absence of younger cover strata or lava like the distribution of rhyolite in the present caldera at the Yellowstone National Park. The standard deviational ellipses (SDEs) of the lavas indicate that younger basaltic lava that erupted from newer calderas overlapped older rhyolitic and basaltic lava as the position of the Yellowstone hotspot progressively migrated to the northeast along the SRP. The less eccentric SDEs of rhyolitic lava in each caldera probably reflect the original caldera-scale spread of viscous felsic lava, compared to the more eccentric and larger SDEs of basaltic lava which represent basalt’s wider and more directed spread due to its higher fluidity and ability to flow longer distances along the trend of the SRP. The alignment of the long axes of the lava SDEs with the trend of the Eastern SRP and the trend of systematic spatial overlap of older lava by successively younger basaltic lava corroborate the previously reported migration of the centers of eruption along the ESRP as the Yellowstone hotspot migrated to the northeast. 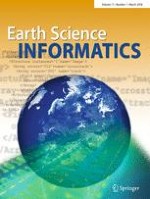 Uncertain spatiotemporal data modeling and algebraic operations based on XML