Spatial distribution, fractions and risk assessment of five heavy metals in the sediments of Jialing River: a tributary of the Yangtze | springerprofessional.de Skip to main content
TOOLBAR 1 2 3 4
SUCHE MENÜ 1 2 3 4

Jialing River is one of the largest tributaries of the Yangtze River and the tributary with the most extensive drainage area among all the tributaries. In recent years, it has suffered severe heavy metal pollution. To study the spatial distribution, sediment fractions, sources and risks posed by Cd, Hg, Cu, Pb and Zn downstream of the Jialing River, 10 sampling sites were selected along the river, we collected surface sediments (0–5 cm), and we measured total concentrations of these five typical heavy metals. The results showed that in the study region, heavy metal pollution was more serious in the downstream areas than in the upstream region. Cd and Hg were found to be the most serious pollutants in the study region, at 2- to fivefold and 2- to fourfold higher than background values, respectively. We found significant correlations between the individual metals, indicating that their sources were similar. A high correlation coefficient was observed between sediments and riverbank soils, indicating that heavy metal accumulation in sediments was primarily the result of erosion. Potential ecological risk assessment ranked the severity of pollution for these metals as Cd > Hg > Cu > Pb > Zn. The average contribution rates of Cd and Hg were 49.42% and 43.41%, respectively, with 40% of the sites reaching a considerable ecological risk level. The concentrations of Cd, Zn and Pb present in the exchangeable (F1) and reducing (F2) fraction were > 50% of total concentration. This finding indicated a strong potential for release into the aquatic ecosystem. Special attention should be paid attention to discharges of Cd and Hg, and strategies should be developed to prevent further Cd and Hg pollution in the downstream reaches of the Jialing River. 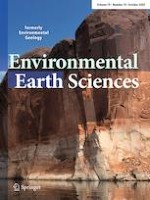 A time-dependent creep model for rock based on damage mechanics

Geochemistry of surface waters and weathering effects in the upper catchment of the Ctalamochita River, Cordoba’s Sierras Pampeanas (Central Argentina)