The process of urban change does not only occur on the outskirts of the city but also in the inner cities in the form of infilling and alterations to existing housing. An observed trend in most cities of the Global South is the concentration and development within the city centres. Using the Wa Municipality as case study, this study seeks to examine the dynamics of inner-city developments. The data was collected through a questionnaire survey and key informant interviews using questionnaires and interview guides, respectively. The findings indicate that inner-city congestion goes through a series of informal processes that lead to alterations of formal urban land plans without statutory approvals. The nature of expansion varies among buildings but largely takes the form of re-engineering of existing houses to create sanitary areas through self-help initiatives that have the potential of creating social and spatial injustices through encroachment in public spaces within the inner cities. A greater extent of this encroachment is led by the emerging upper- and middle-class households in this neighbourhood and subsequently create problems in the use of public spaces as the urban poor are deprived. As the New Urban Agenda has signified a profound opportunity for the planning profession, the results therefore suggest that there is the need for concerted efforts by city planners to prioritise inner cities in their quest to manage urban development. 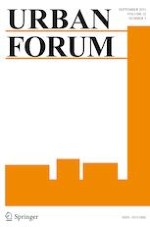 Correction to: ‘Where Art Thou?’: Ethnocracy, Toponymic Silence, and Toponymic Subjugation in the Harare Commemorative Landscapes During the Mugabe Era (1980–2017)

The Relation Between Residential Self-Selection and Urban Mobility in Middle Eastern Cities: the Case of Alexandria, Egypt