Spatial rich model (SRM) steganalysis feature is formed by high-order statistics collected from image noise residuals. These statistics are simply rescaled before machine learning. It is noted that SRM features of different cover images are very different. In this paper, we propose a feature normalization method based on random feature-subsets (NRS) for SRM. We randomly draw feature-subsets from SRM feature. Then these feature-subsets are normalized by using per-sample rescaling method to make the feature-subsets of different images have the same 1-norm (the sum of all elements). The proposed NRS method can adjust the feature distribution and increase the feature diversity. The normalized feature-subsets can achieve better detection performance and also can be used as a useful complement for the existing steganalysis features. Experimental results show that: (1) a small amount of normalized feature-subset supplement can obviously improve the detection performance of SRM feature; (2) under the same dimensionality, the proposed NRS version feature can achieve a better detection accuracy than that of original feature; (3) the proposed NRS method is applicable to projections of spatial rich model feature; (4) compared with steganalysis feature extraction, the computational time of NRS can be negligible. 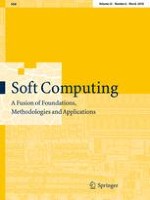 A representation of residuated lattices satisfying the double negation law