Human-driven dynamics of land cover types in the Tarim Basin are able to affect potential dust source regions and provide particles for dust storms. Analyses about dynamics of potential dust source regions are useful for understanding the effects of human activities on the fragile ecosystem in the extremely arid zone and also provide scientific evidence for the rational land development in the future. This paper therefore selected the Tarim Basin, NW China, as a representative study area to reveal spatiotemporal dynamics of land cover and their impacts on potential dust source regions. The results showed that farmland, desert and forest increased by 28.63, 0.64 and 29.27%, while grassland decreased by 10.29% during 1990–2010. The largest reclamation, grassland loss and desertification were 639.17 × 103, 2350.42 × 103 and 1605.86 × 103 ha during 1995–2000. The relationship between reclamation and grassland loss was a positive correlation, while a highly positive correlation was 0.993 between the desertification and grassland loss at different stages. The most serious dust source region was the desertification during 1990–2010 (1614.58 thousand ha), and the serious region was stable desert (40,631.21 thousand ha). The area of the medium and low dust source region was 499.08 × 103 and 2667.27 × 103 ha. Dramatic reclamation resulted in the desertification by destroying natural vegetation and breaking the balance of water allocation in various regions. 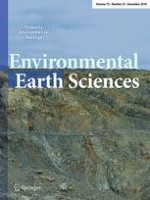 Analysis of spalling failure in marble rock slope: a case study of Neyriz marble mine, Iran

Effects of intertidal reclamation on tides and potential environmental risks: a numerical study for the southern Yellow Sea