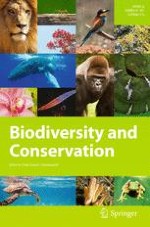 Landscape connectivity and the role of small habitat patches as stepping stones: an assessment of the grassland biome in South America

Google Trends and cycles of public interest in biodiversity: the animal spirits effect