We used data from a light-trapping study at 28 sites on floodplain forest moths in eastern Austria to assess the performance of a variety of species richness and species diversity measures. At each site the data (32,181 individuals from 448 species) contain a large fraction of species represented only as singletons. Sampling effort was evenly spread across sites, but sampling success varied greatly. Influx of moths from the landscape matrix surrounding floodplain forest patches lead to substantial proportions of stray individuals from the regional species pool. Under these conditions, observed species numbers as well as eight extrapolation estimators of species totals failed to reflect differences between three study regions or between flooded and non-flooded forest habitats. Rarefied species numbers and Fisher’s α of the log-series distribution captured differences in moth diversity between regions, but failed to mirror flooding impact. Only Shannon’s diversity captured all expected diversity differences, at high significance levels. Application of Chao and Shen’s bias correction increased figures of Shannon’s diversity, but did not affect the outcome of statistical comparisons. We conclude that for species-rich incompletely sampled communities of highly mobile insects the evaluation of the complete species-abundance information using Shannon’s diversity is the most promising mode to compare local species diversity with a high degree of ecological resolution. Species richness measures apart from those obtained through rarefaction cannot be recommended, as they are sensitive to sources of bias that pertain to many empirical sets of field data. 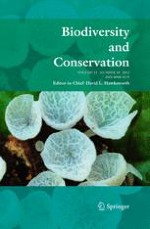 Complex impact of an invasive crayfish on freshwater food webs

Impacts of Argentine ants on invertebrate communities with below-ground consequences