This paper presents a speed-up ellipse enclosing character detection algorithm that uses parallel image scanning and the Hough transform (HT) for large-size document images. Objects in images are generally detected based on geometrical information obtained via raster scanning. In raster scanning, all pixels of an image are scanned starting from the upper-left point and ending with the lower-right point. In the case of large-size images, considerable time is needed for processing an image by scanning all pixels. In this paper, an object detection approach for large-size images is proposed which does not require scanning all pixels in the images. In this speed-up ellipse enclosing character detection approach for large-size document images, pixels are scanned on constantly spaced vertical parallel lines. If an object larger than a certain size is identified while scanning, the presence of an ellipse enclosing character is assumed and ellipse detection is conducted by applying HT only in a defined local image area over the found object. With this approach, processing time can be dramatically reduced by disregarding some objects and reducing the total image area used for ellipse detection. 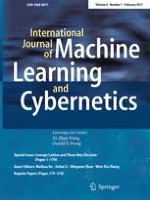 Constructing lattice based on irreducible concepts

Incremental approaches to knowledge reduction based on characteristic matrices