After demolding, plane structures made of fibrous polymer-matrix composites often show a warpage and, owing to spring-in angles, do not reach the designed shape. Considerable effort has been put into the development of methods for simulating the distortions in order to avoid them by countermeasures. Besides the empirical trial-and-error-based procedure, there is a choice between simulation-based and semianalytical approaches. This paper focuses on the latter ones as being fast and sufficiently accurate for an initial design. Spring-in is observed in curved structures. A simple formula relates the amount of spring-in to the difference between their in-plane and transverse properties. Furthermore, it has been shown that an equivalent coefficient of thermal expansion can be determined with the use of L-shaped coupons. With the aid of this coefficient, the spring-in of more complex structures can be calculated with a sufficient accuracy. Experiments reveal a considerable warpage of plain structures, especially of slender plates. This happens in the cases of one-sided molds, obviously depends on the part/tool connectivity, and is caused by the difference in thermal expansion, as well as by the development of cross-linking in the thickness direction. Other parameters of influence may be gradients in the fiber volume fraction or resin-rich layers. A simple formula based on a model of two beams on top of each other was developed. It relates the artificial coefficients of thermal expansion to the curvature of the compound beam. Warpage measurements on simple test specimens allow one to determine these coefficients, which then can be used in detailed FEM analyses of more complex structures in order to anticipate their behavior on demolding.
Anzeige

Vorheriger Artikel A Finite-Element Model for the Lateral Stiffness and Vibration Characteristics of RС Shear Walls Strengthened with Composite Sheets: Creep and the Shrinkage Effect
Nächster Artikel Development of a Highly Stressed Bladed Rotor Made of a CFRP Using the Tailored Fiber Placement Technology 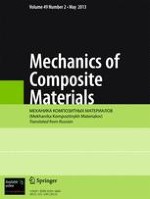 An Analysis of the Nonlinear Behavior of Lignin-Based Flax Composites

A Finite-Element Model for the Lateral Stiffness and Vibration Characteristics of RС Shear Walls Strengthened with Composite Sheets: Creep and the Shrinkage Effect

Springback Angle of a C/PPS Laminate with a Textile Reinforcement