In this paper, we present SPRinT, a control interface design for a telepresence robot that uses only a smart phone without any external sensors. In addition to basic controllability, we focus on providing a reasonable level of spatial understanding as well as a feeling of telepresence through the interaction. The central idea of SPRinT is to have the operator control and interact with the system by “posing” as the robot in the remote area in order to elicit a sense of telepresence, promote spatial task performance, and improve the overall interactive experience. We have applied the proposed interaction design principle to remote robot control, and compared it to a nominal touch-button based interface in terms of the controllability, the level of user-felt telepresence, and spatial understanding. Our experiments showed that the proprioceptive and spatial nature of the motion-based rotational control was critical in eliciting the sense of telepresence and spatial understanding, and this in turn was also important to ensure effective exploration and awareness of remote spaces. On the other hand, the traditional touch-button interface was more appropriate for translation for which a proper proprioceptive metaphoric command could not be designed. Overall, the mixed approach (body/motion based for rotation and touch based for translation) proved to offer a good middle ground since the interaction method was familiar and easy to use with a reasonable level of telepresence. 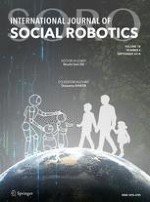 A Robot that Distributes Flyers to Pedestrians in a Shopping Mall

“I Know That Now, I’m Going to Learn This Next” Promoting Self-regulated Learning with a Robotic Tutor

The More the Merrier? Effects of Humanlike Learning Abilities on Humans’ Perception and Evaluation of a Robot