This article presents the challenges encountered during the stability analysis and stabilization of two Himalayan rock slopes supporting the Chenab Railway Bridge in India, which will be the highest railway bridge in the world after completion. Owing to the importance of the project, extensive geological investigations, in situ and laboratory tests were carried out using conventional and advanced methods to evaluate various intact rock, rock joints, rock mass properties and rock mass quality present at the site. Once the conclusive results were made regarding these properties, stability of slopes were evaluated against both structurally controlled and stress-controlled failures using the developed probabilistic approach due to the presence of high variability in intact rock, rock mass and rock joints properties. It was observed that while the slopes were stable against stress-controlled failures, the possibility of structurally controlled failures exists as observed in the probabilistic approach in which the conventional deterministic approach was not able to detect. Different stabilization measures, i.e. rock bolts, slope flattening, grouting, drainage and shotcreting, were designed at the site to reduce the probability of failures for the slopes, deformability of rocks present due to cavities and high aperture joints, shallow block failures along the slope surface and pore-pressure build-up. To check the efficiency of the stabilization measures, cross-hole seismic tomography is carried out at the site and further in situ measured displacements are compared with the displacements estimated using the developed probabilistic approach. The case study used in this paper is a real-time ongoing bridge project of global interest and the data and analysis presented will be of great benefit to the researchers and practitioners working on similar problems. 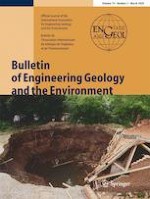 Failure models of a loess stacked dam: a case study in the Ansai Area (China)

A new experimental apparatus for sudden unloading of gas-bearing coal