This paper provides stability analysis of a robust interaction control, nonlinear bang–bang impact control, for one degree-of-freedom robot manipulators. The interaction controller takes advantages of robot joint’s friction that is not helpful for constrained space control usually, has no need to change gains throughout the tasks requiring free space motion, constrained motion, and the transition between the two, and needs virtually no information on robot dynamics for its design and implementation. Despite these advantages, to date, there was no complete and formal proof of its stability, hindering its practical use for interaction tasks requiring robots’ frequent contact with various environments, including humans. A sufficient stability condition was derived based on the L∞ space analysis with its physical implications. Stability condition was found to be only dependent on the intentional time delay for the online lumped robot dynamics estimation and the inertia estimation accuracy and was not dependent on the passive environment properties and disturbances. Interestingly, in the case of the nonlinear bang–bang impact control, joint frictions helped stabilize the robot during the transition from free space to constrained space. 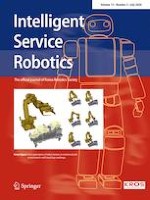