Stability properties of the mean flow after a steady symmetry-breaking bifurcation and prediction of the nonlinear saturation | springerprofessional.de Skip to main content
TOOLBAR 1 2 3 4
SUCHE MENÜ 1 2 3 4

In this paper, it is shown that when a flow undergoes a steady bifurcation breaking one reflection symmetry, the mean flow obtained by averaging the two possible asymmetric flow fields resulting from the instability remains marginally stable in the postcritical regime. This property is demonstrated rigorously through an asymptotic analysis which closely follows that proposed in Sipp and Lebedev (J Fluid Mech 792:620–657, 2007) for a Hopf bifurcation with focus on wakes. In the case of wakes, the marginal stability of the mean flow is well known and had several consequences documented in the literature. To the authors’ knowledge, the marginal stability of mean flows after a symmetry-breaking pitchfork bifurcation is demonstrated here for the first time. As an example of possible consequences of marginal stability, the self-consistent model proposed for wakes in Mantič-Lugo et al. (Phys Rev Lett 113:084501, 2014) and relying on marginal stability is also applied here to the symmetry-breaking instability of the flow in a channel with a sudden expansion. For this specific case, the marginal stability of the mean flow is first demonstrated by dedicated direct numerical simulations; successively, it is shown that the resulting self-consistent model predicts the nonlinear saturation of the instability with remarkable accuracy.

Titel
Stability properties of the mean flow after a steady symmetry-breaking bifurcation and prediction of the nonlinear saturation
Autoren:
Simone Camarri
Giacomo Mengali 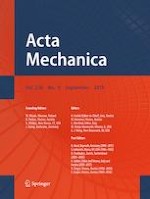 Air-assisted impact of water drops on a surface

Analytical modeling of the stick-slip motion of an oscillation drum