Advancements in scientific research and technological development (SRTD) influence the practice of organ donation and organ transplantation (ODOT). Many SRTD governance discourses put forward the need for multi-stakeholder engagements. We posit that staff employed by organ procurement organizations have a stake in the discussions around SRTD applicable to ODOT because SRTD is one factor that shapes ODOT and because staff are involved in ODOT education and awareness raising while acting as a nexus between donors and the public. Therefore, we performed a content analysis of eight semi-structured in-depth interviews with staff of one Canadian organ procurement organization to ascertain the views that staff had on the use of (a) SRTD in ODOT in general; (b) specific SRTD envisioned to be used in the future in ODOT namely xenotransplantation, embryonic and non-embryonic stem cells, cloning, bionic/artificial organs, and 3-D printed organs; and (c) the emerging ability of SRTD applicable in ODOT to enhance bodily abilities beyond the normal. We found that staff had views on the topics covered in this study, and staff acknowledged that they do not possess sufficient knowledge to be able to engage meaningfully in governance discussions of the SRTD covered and to educate others on these SRTDs. We recommend implementing continuous education for the staff on SRTD envisioned to be applied in ODOT as a capacity-building measure to enable their participation in the governance discussions of these SRTDs and to enhance their ability to educate others on ODOT applicable SRTD. 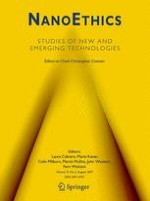 More than a Decade On: Mapping Today’s Regulatory and Policy Landscapes Following the Publication of Nanoscience and Nanotechnologies: Opportunities and Uncertainties

Whose Future is it Anyway?

Futures Perfect and Visioneering: a Re-Assessment

Nanoethics, Science Communication, and a Fourth Model for Public Engagement