The online version of this article (https://​doi.​org/​10.​1007/​s12599-019-00623-1) contains supplementary material, which is available to authorized users.
Accepted after three revisions by Jelena Zdravkovic.

Forms are central interfaces for information exchange between a government and its citizens. As a way to translate laws into practice, forms are an essential part facilitating this exchange. Unfortunately, forms often require substantial development effort to ensure they comply with legal requirements, with the result that citizens often describe them as highly complex. Standardization of forms through reference modeling would help to minimize governments’ effort by reusing elements and would reduce complexity for citizens by providing a unified representation of information. The article contributes a meta-model for a modeling language that can be used in representing reference models for forms. It follows a design science research approach to elicit form structure and editorial process requirements and to iteratively design the meta-model. The paper demonstrates and evaluates the meta-model using focus groups and application in three case studies. It extends research on standardization to reference modeling and government forms. 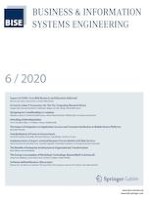 The Energy Consumption of Blockchain Technology: Beyond Myth

A Case for a New IT Ecosystem: On-The-Fly Computing

The Benefits of Enterprise Architecture in Organizational Transformation