This qualitative multiple-comparative case study investigates (1) The reported experiences and impressions of four pre-service teachers (PTs) on practicum placement in four different classrooms (grades 1–9) where a new Steps to Inquiry (SI) framework was being utilized to support students conducting open inquiry; (2) The relative dispositions of the PTs toward conducting open inquiry, as indicated by their core conceptions regarding science, the purpose of education, effective teaching, and the capacity of students. Findings indicate that (1) although there were differences in the experiences of the four PTs, all four had an opportunity to observe and/or facilitate students conducting open inquiry with the SI framework, and after the practicum, all of them reported that they would like to include open inquiry in their own classrooms in the future; (2) one PT already possessed core conceptions indicative of a favorable disposition toward open inquiry before the placement; another altered her core conceptions substantially toward a favorable disposition during the placement; a third altered her conceptions regarding the capacity of students; and one PT maintained core conceptions indicative of a disposition that was not favorable to open inquiry despite the pronouncements that she would like to conduct open inquiry with students in their own future classroom. Possible reasons for the differences in the responses of the four pre-services teachers to the practicum placement are discussed. 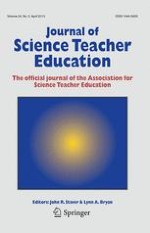 Inquiry-Based Instruction and Teaching About Nature of Science: Are They Happening?