Asymmetric incremental sheet forming (AISF) is a manufacturing process for the small batch production of sheet metal parts. In AISF, a sheet metal part is formed by a forming tool that moves under CNC control. AISF currently has two dominant process limits: sheet thinning and a limited geometric accuracy. This paper focuses on the latter limit. It is shown with a pyramidal part that multi-stage forming can yield an increased accuracy compared to single-stage forming. However, due to residual stresses induced during forming, the accuracy of the as-formed part can be lost if the part is trimmed after forming. A case study with a car fender section shows that the geometric accuracy of the final part can be improved compared to single-stage forming by a combination of multi-stage forming and stress-relief annealing before trimming. 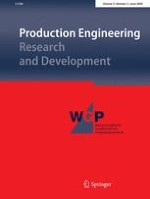 Implementation of a process and structure model for turning operations