The microstructure and mechanical properties of copper clad steel (CCS) wires drawn with different amount of deformation were investigated by electron backscatter diffraction, Vickers micro hardness testing, tensile testing and scanning electron microscope. The results showed that the equiaxed grains of copper and ferrite transformed gradually into elongated grains along the drawing direction with the deformation amount increasing, and the copper and ferrite grains near the interface exhibited finer grain size than those away from the interface after drawing. With the deformation amount rising, the micro hardness of copper and steel core increased, and strength of CCS wires increased and the elongation of CCS wires decreased. There are different fracture mechanics of CCS wires under different amount of deformation during tensile testing. When the deformation amount was 34.4 %, the copper layer and steel core were broken at the same time as the CCS wires were broken during the tensile testing. When the deformation amount was 97.1 %, the steel core was broken firstly, then the copper layer was broken. Therefore, the models of strength prediction of CCS wires based on fracture mechanics were proposed. The models of strength prediction of CCS wires under small and large amount of deformation are σ b(ccs) = σ b(cu)νcu + σ b(Fe)(1 − νcu), η < 90.6 %, and σ b(CCS) = σ b(Fe), η ≥ 90.6 %, respectively. 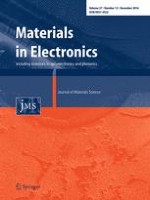 Effect of multiple defects and substituted impurities on the band structure of graphene: a DFT study