Rock mass in the fault fracture zone has some characteristics such as low strength and poor self-stability, so the control mechanism of stability has been a difficulty in the research of underground engineering. A set of laboratory simulation method of fault fractured rock mass is developed to reflect the natural forming process of fault fracture zone. Compared with intact rock mass, the fault fractured rock mass has an obvious degradation in strength and deformation parameters, and the degradation index is between 22.79 and 84.06%. The bolt has a certain supporting effect on the fault fractured rock mass, and in the situation of end anchoring, the greater the pretightening force is, the better the enforcement effect will be. The stress field produced by high pretightening force can relieve the stress concentration around the bolt hole and make the initial cracks of rock mass away from the bolt plate. The evolution curve of bolt axial force in the process of uniaxial compression of large-scale specimen shows four stages, which are the initial compression stage, pre-peak joint load-bearing stage, post-peak joint load-bearing stage and the residual stage. Research results could provide some theory reference for the stability control of rock mass in the fault fracture zone. 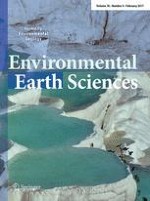 Numerical simulation on the marine landslide due to gas hydrate dissociation