Undoped and aluminum-doped ZnO thin films are prepared by the sol–gel spin-coating process. Zinc acetate dihydrate, ethanol and mono-ethanolamine are used as precursor, solvent and stabilizer, respectively. The atomic percentage of dopant in solution were [Al/Zn] = 1 %, 2 % and 3 %. The effect of Al doping on the optical and electrical properties of ZnO films was investigated by X-ray diffraction (XRD), Four-Point probe technique and UV–visible spectrophotometery. The results from the X-ray diffraction show that the pure ZnO thin films had a polycrystalline structure of the hexagonal Wurtzite Type. A minimum resistivity of \(3.3 \times 10^{-3} \Omega \cdot \mathrm{cm}\) was obtained for the film doped with 2 mol % Al. Optical transmissions reveal a good transmittance within the visible wavelength spectrum region for all of the films. The value of the band gap is enhanced from 3.21 eV (undoped ZnO) to 3.273 eV (Al/Zn = 3 %), the increase in the band gap can be explained by the Burstein–Moss effect. 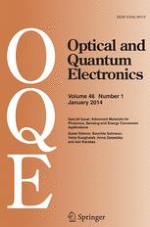