Eu-doped Ba1−xSrxTiO3 (x = 0, 0.2, 0.3, and 0.4) thin films with Eu-doping content of 1 mol% have been prepared on fused silica substrates by a chemical solution deposition method and characterized by X-ray diffraction (XRD), atomic force microscopy (AFM), optical and photoluminescence measurements. XRD analysis showed that the films were well crystallized with a pure perovskite structure in the annealing temperature range from 650 to 750 °C. AFM observation indicated that the films were dense and smooth. The band-gap energies of the thin films were also investigated. The more the Sr content in the thin films, the narrower the energy gap of the thin films. Photoluminescence spectra of the thin films showed two prominent transitions of Eu3+ ions at 594 nm (5D0 → 7F1) and 618 nm (5D0 → 7F2) upon excitation at 395 nm (7F0 → 5L6). The observed changes of luminescence spectra by the decrease of the intensity ratio R, which was defined as the ratio of the integrated emission intensity of 5D0 → 7F2 transition to that of 5D0 → 7F1 transition, were associated with the increase of the inversion symmetry of Eu3+ sites when Sr content increased. Lifetime study of photoluminescence indicated that the average lifetime of the thin films was approximately 0.7 ms. 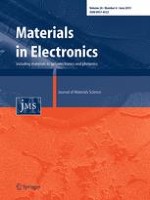