Ceramics of Ba0.925Bi0.05(Ti0.95−xZrx)Sn0.05O3 (0.05 ≤ x ≤ 0.30) were prepared by conventional solid-state reaction technique. The effects of the Zr4+ addition to the structural and dielectric properties were investigated. The room temperature X-ray study has allowed to evidence a tetragonal symmetry up to x = 0.10, and beyond it to a cubic single phase. Thermal dielectric study at different frequencies has revealed two different behaviors, a normal ferroelectric for x ≤ 0.10, and a relaxor character for the rest of the solid solution. High temperature Raman spectra corroborates the arguments of the phase transition revealed by dielectric results. In addition, a remarkable line broadening was observed in Raman spectra, which can be attributed to a certain disorder in the structure lattice. The low Zr-composition was found to exhibit a flat εr′(T) curve with stable dielectric permittivity in a large range of temperature, promising for the X7R specifications. 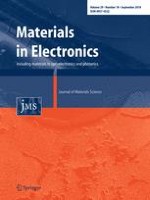