The aim was to test whether or not students from differently segregated schools within a city could compensate for this variation through their choices of classmates to work with. Data for 1,697 students from 78 classes in year 6 of compulsory school, with an average of 20 % immigrants, was collected covering both segregated and non-segregated areas with respect to housing and schools. Each student was asked which three peers he/she preferred working with in the classroom and ranked these names in order 1–3. The coherence of the networks formed using bilateral choices was analysed by use of eigenvector centrality (SSI). A higher SSI of a network indicated a high coherence of individuals within the network and therefore considered more isolated (or segregated) than networks with lower SSI. The names of the students were categorized as Scandinavian or non-Scandinavian. Networks were formed consisting of Scandinavians, non-Scandinavians and a mixture. In classrooms with non-Scandinavians, mixed networks were quite common. There was no difference of weighted SSI between the three types of networks within the same school class. Furthermore the coherence of the total number of networks formed by Scandinavians, non-Scandinavians and mixed networks was equal. Segregation between the different student networks could neither be demonstrated at a class level, nor between the three types of networks irrespective of class. Segregation within schools was thus at least partly neutralized by peer effects seen in student´s voluntary choices. Outside networks overrepresentation of lonely non-Scandinavian girls and of absent Scandinavian boys was found. 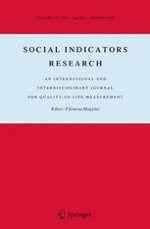 Nonreligious Group Factors Versus Religious Belief in the Prediction of Prosociality

Mental Health and Wellbeing of the Undergraduate Students in a Research University: A Malaysian Experience

Assessing the Relationship Between Social Vulnerability and Community Resilience to Hazards

Assessing Divergences in Mathematics and Reading Achievement in Italian Primary Schools: A Proposal of Adjusted Indicators of School Effectiveness