3,4,9,10-perylenetetracarboxylic dianhydride (PTCDA) films without and with light Ni-doping were prepared in high vacuum chamber and studied by a combination of atomic force microscopy, X-ray diffraction, X-ray photoelectron spectroscopy, ultraviolet–visible (UV–Vis) spectrophotometry and Raman spectroscopy. The results indicated that the undoped PTCDA film and the PTCDA film doped in the (PTCDA:Ni) molar ratio of 1:0.73 were β-phase crystallites with the crystallinity of 13.80 and 3.22 %, respectively. The crystallite morphologies were changed gradually and appeared in amorphous states with the increase of Ni-doping, and Ni in its amorphous state was dispersed in Ni-doped PTCDA films; also the UV–Vis absorption were reduced gradually with the increase of Ni-doping. Nevertheless, the fluorescence background of Raman spectra of PTCDA film was effectively restrained by the low concentration of Ni-doping, which was advantageous to the Raman spectra detection. 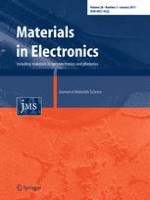 The quenching of silver nanoparticles photoluminescence by graphene oxide: spectroscopic and morphological investigations