The microstructure, texture, and mechanical properties of the Al/Ni/Cu composite during various accumulative roll bonding (ARB) cycles were studied using optical microscopy, scanning electron microscopy, x-ray diffraction, shear punch test, and hardness test. In addition, ImageJ software and Rietveld software were used in order to study microstructure and dislocation density variations, respectively. It was found that Ni and Cu layers were fractured and distributed in the Al matrix due to differences in their mechanical properties. Fracture and distribution of Cu and Ni particles after cycle five led to the alteration of the composite structure from a layered to a particle-reinforced structure. ARB process leads to the formation of strong orientation along the β-fiber and also to pronounced copper and dillamore components in both Al and Cu phases. Furthermore, the shear yield stress and ultimate shear strength of the composite increased as the ARB process advanced; however, shear elongation presented a non-uniform variation. Investigation of the fracture surfaces revealed that the mechanical properties of the composite are affected not only by the strain hardening of the Cu layer, but also by the structural change in the composite during the initial ARB cycles. During the last stages of the process, however, changes in mechanical properties were mostly governed by reinforcement particles serving as strain concentration zones and the strain hardening of the Al matrix. 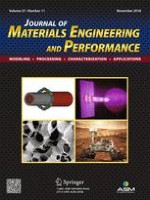 The Influence of Pr and Nd Substitution on Hydrogen Storage Properties of Mechanically Alloyed (La,Mg)2Ni7-Type Alloys