This article deals with the issue of economic integration of immigrants in Italy. Ethnic inequality and economic stratification are analysed based both on the European Survey on Income and Living Conditions (EU-SILC) and the ad-hoc survey on households with foreign people conducted by the National Institute of Statistics in 2009. With reference to the native group and the groups identified by the largest ethnic communities living in Italy, through the Analysis of Gini decomposition technique, the article highlights that the between-group inequality accounts for a barely four percent of the overall inequality, the largest share being due to the inequalities within the groups. The policy prescription suggested is the adoption of “peculiar” policies on specific subgroups of immigrants aimed at reducing the disparities within the subgroups. 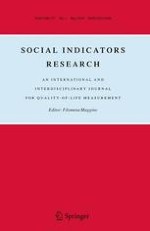 How Does Leisure Time Affect Production Efficiency? Evidence from China, Japan, and the US

The Impact of Public Services Expenditure on the Spanish Income Distribution

Enhancing the Wellbeing of Base of the Pyramid Entrepreneurs through Business Success: The Role of Private Organizations

How the Poor Deal with Their Own Poverty: A Social Psychological Analysis from the Social Identity Perspective

Bringing Affect Back in: Measuring and Comparing Subjective Well-Being Across Countries