In this paper, we propose a sub-vector based speaker characterization method for biometric speaker verification, where speakers are represented by uniform segmentation of their maximum likelihood linear regression (MLLR) super-vectors called m-vectors. The MLLR transformation is estimated with respect to universal background model (UBM) without any speech/phonetic information. We introduce two strategies for segmentation of MLLR super-vector: one is called disjoint and other is an overlapped window technique. During test phase, m-vectors of the test utterance are scored against the claimant speaker. Before scoring, m-vectors are post-processed to compensate the session variability. In addition, we propose a clustering algorithm for multiple-class wise MLLR transformation, where Gaussian components of the UBM are clustered into different groups using the concept of expectation maximization (EM) and maximum likelihood (ML). In this case, MLLR transformations are estimated with respect to each class using the sufficient statistics accumulated from the Gaussian components belonging to the particular class, which are then used for m-vector system. The proposed method needs only once alignment of the data with respect to the UBM for multiple MLLR transformations. We first show that the proposed multi-class m-vector system shows promising speaker verification performance when compared to the conventional i-vector based speaker verification system. Secondly, the proposed EM based clustering technique is robust to the random initialization in-contrast to the conventional K-means algorithm and yields system performance better/equal which is best obtained by the K-means. Finally, we show that the fusion of the m-vector with the i-vector further improves the performance of the speaker verification in both score as well as feature domain. The experimental results are shown on various tasks of NIST 2008 speaker recognition evaluation (SRE) core condition. 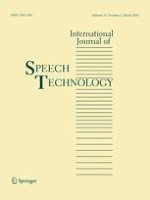 Integration of Yoruba language into MaryTTS