An electrospinning method was used to synthesize the Co3O4/NiO nanofibers, which then was sulfurized by solvothermal method in order to improve their electrochemical properties. The SEM pictures showed that sulfurized Co3O4/NiO nanofibers were irregular short nano-rods consisting of nanocrystalline particles; the BET tests showed that sulfuration is beneficial to improve the specific surface area of the fibers; the XPS showed that the existence of the valence state: Co2+, Co3+, Ni2+, Ni3+ and S2− in sulfurized sample, which was confirmed by XRD as Co3S4 and Ni0.96S, respectively. Especially, electrochemical tests showed that the sulfurized Co3O4/NiO nanofibers electrode delivers high specific capacity of 156.84 mA h g−1 at 1 A g−1 and 151.07 mA h g−1 at 10 A g−1 and after 1000 cycles, its capacity retention reaches 87.3% at 5 A g−1. The mechanism of improving the electrochemical performance after sulfidation was also discussed in detail. 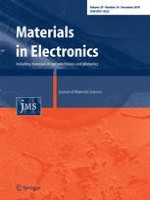 Towards understanding the morphological, magnetic, optical and electrical properties of MnO2 nanowires for magneto-and optoelectronic applications

Effect of oxygen content on wettability, microstructure and solderability of Au–20Sn solders