In this study, we used the framework of institutional anomie theory (Messner and Rosenfeld in Crime and the American dream, Wadsworth, Delmont, CA, 2001; Rosenfeld and Messner in: Passas and Agnew (eds) The future of anomie theory, Northeastern University Press, Boston, 1997) to examine the relationship between supervisors’ ethics and their personal value orientation, including achievement and pecuniary materialism. We further investigated whether these individual-level associations were moderated by societal factors consisting of income inequality, government efficiency, foreign competition, and technological advancement. Hierarchical linear modeling was used to analyze data of 16,464 supervisors from 42 nations obtained from the 2010–2014 wave of the World Values Survey. Results showed that strong achievement value orientation was positively related to willingness to justify ethically suspect behaviors; government efficiency and technological advancement, respectively, had negative and positive moderating effects on this relationship. On the other hand, foreign competition had a positive moderating effect on the association between pecuniary materialism and ethicality. 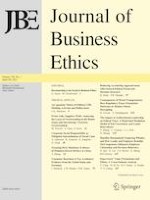 A Developmental Model for Educating Wise Leaders: The Role of Mindfulness and Habitus in Creating Time for Embodying Wisdom

An Agonistic Notion of Political CSR: Melding Activism and Deliberation

Consumer Reactions to Tax Avoidance: Evidence from the United States and Germany

Reconnecting to the Social in Business Ethics