Cyanobacteria also known as blue-green algae can be found in almost every conceivable environment. Cyanobacteria blooms occur frequently and globally in water bodies and they are a major concern in terms of their effects on other species such as plants, fish and other microorganisms, but especially by the possible acute and chronic effects on human health due to the potential danger from cyanobacterial toxins produced by some of them in recreational or drinking waters. Consequently, anticipation of cyanotoxins presence is a matter of importance to prevent risks. The aim of this study is to build a cyanotoxin diagnostic model by using support vector machines and multilayer perceptron networks from cyanobacterial concentrations determined experimentally in the Trasona reservoir (recreational reservoir used as a high performance training centre of canoeing in the Northern Spain). The results of the present study are two-fold. In the first place, the significance of each biological and physical-chemical variables on the cyanotoxins presence in the reservoir is presented through the model. Secondly, a predictive model able to forecast the possible presence of cyanotoxins is obtained. The agreement of the model with experimental data confirmed its good performance. Finally, conclusions of this innovative research work are exposed. 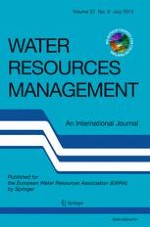 The Effects of Groundwater and Surface Water Use on Total Water Availability and Implications for Water Management: The Case of Lake Naivasha, Kenya